A Visit to Falkner Country 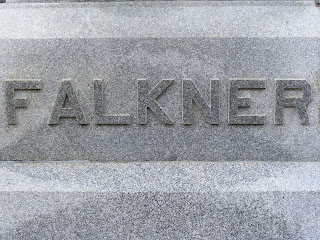 No, that is not a typo. William Faulkner's surname was originally spelled without the 'u.' As the story goes, William himself supposedly added the extra letter in 1918 in an attempt to join the Royal Air Force as an Englishman. But the folks in Tippah County know the family as Falkner, and it is here that yesterday we ventured, on a mission to visit graveyards associated with this family. My husband is somewhat of a Faulkner scholar and during visits to the Ripley area in the past, was taken to the Falkner family plot at Ripley Cemetery as well as to the grave outside Ripley of a man murdered by Col. Falkner, William's great-grandfather. And as my husband correctly points out, William Faulkner's Yoknapatawpha County was as much influenced by Tippah County as it was by Lafayette County. Posts will be forthcoming over the next few days of what the graveyard rabbit found up in Tippah County.
Posted by Mona Robinson Mills at 5:22 AM