James Edward Hope was a son of Levi Hope and Jane Harris Hope and is buried in the Hope family plot at College Hill Cemetery. His gravemarker, pictured above, has a carved image of what appears to be the Confederate flag. The marker is inscribed as follows:
James Edward Hope
Died Nov. 14, 1907
Born at College Hill
July 29, 1842
Youngest Child Of
Levi Hope and Jane M. Harris
of Cabarrus County, N.C.
Served as Ensign 30 Miss.
Volunteer Infantry
Confederate Army
-------
A Tribute of Love
Posted by Mona Robinson Mills at 7:59 PM 3 comments: 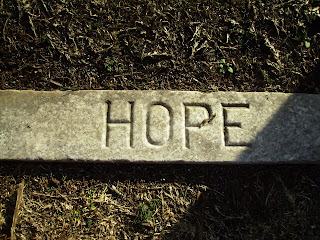 The Hope family plot can be seen below, surrounded by a low stone border. Above is a picture of the family name carved into the border at the plot's entrance. Levi Hope, who was born in 1795 in North Carolina, was the patriarch of this Lafayette County family, arriving here before 1840 from Cabarrus County, North Carolina. He was the son of Robert Hope and Catherine Allison and the husband of Jane Malissa Harris. Levi was also a slaveowner with 29 slaves listed on the 1850 Slave Schedule. One of the graves in the slave graveyard has a surname of Hope, and I'm sure that many of the unmarked graves were those of Hope slaves.

The Hope family were of Scotch-Irish origin, originally arriving like most Scotch-Irish immigrants first to Pennsylvania and then moving south into Virginia and the Carolinas. Levi Hope appears to be the only one who migrated to Lafayette County, Mississippi. He apparently was a man of some substance since he served in the North Carolina General Assembly in 1835 as a representative of Cabarrus County. 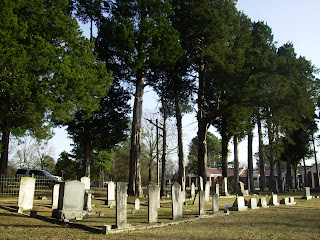 Posted by Mona Robinson Mills at 7:27 PM No comments: 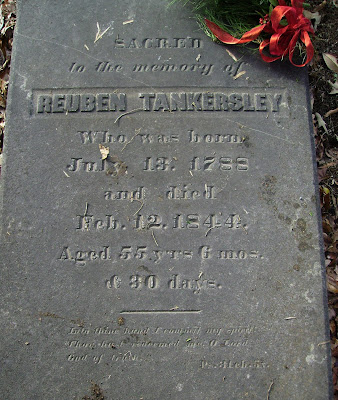 One of the oldest graves in the College Hill Presbyterian Cemetery belongs to Reuben Tankersley who was born in 1788 and died in 1844. His grave is marked by a plain but elegant stone slab. Reuben is believed to have arrived in Lafayette County in 1842, the same year the Presbyterian Church bought land for its church building. The building wasn't completed until 1846, two years after Reuben's death.

Reuben and his wife, Aisley, had several children, and many of their descendants are buried in the cemetery with them.
Posted by Mona Robinson Mills at 12:15 AM 6 comments:

One of the more interesting aspects of College Hill Presbyterian Cemetery is the slave graveyard located at the rear of the formal cemetery. Only a few markers remain but sunken areas define other likely locations of graves. In addition to the slaves, Union soldiers were buried in this area during the time the church was used by Union forces during the Civil War.

The photo below is of two gravemarkers in this area that appear to be be homemade. The smaller marker reads "Tom Lewis" while the larger marker has the words "Mary Jane Louis" with the three names stacked on top of each other and a line drawn between them. The "n" in the name "Jane" is written backwards. It appears that this could be a couple, Tom and Mary Jane Lewis. 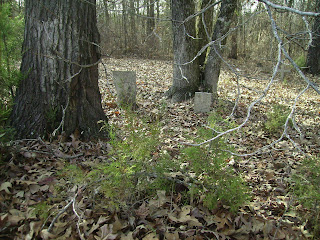 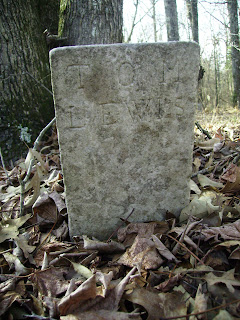 Posted by Mona Robinson Mills at 12:10 AM No comments: 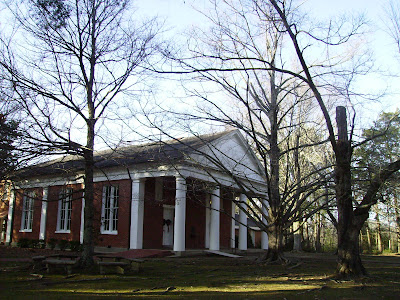 The building that houses College Hill Presbyerian Church was completed in 1846 and gets credit for being the oldest church in Lafayette County. Actually, the church itself was organized even earlier, in 1835, when Scotch-Irish settlers began meeting in the home of Alexander Shaw. The bricks used in constructing the church building were fired on site, and the pulpit, pews and pew gates are original furnishings. It is a beautiful church in a beautiful location.
During the Civil War, thousands of Grant's troops camped here in the College Hill area, and behind the main cemetery of the church are several unmarked graves of Union soldiers.
You might be surprised to learn that William Faulkner was married in this church.
Posted by Mona Robinson Mills at 1:13 PM No comments: 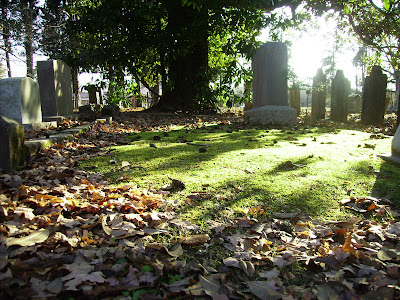 Moss covers the ground underneath the wide branches of an old magnolia tree in the cemetery behind College Hill Presbyterian Church north of Oxford in Lafayette County. We took time out of a busy day to visit the cemetery and take advantage of some much-needed sunshine.