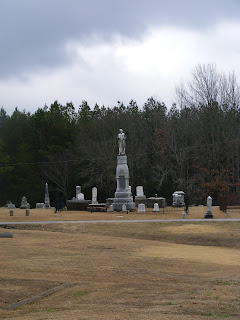 Col. William C. Falkner's grave marker is by far the tallest monument in the Ripley Cemetery. Sources indicate that the monument was built by C. J. Rogers & Sons of Grand Junction, Tennessee at a cost of $2,022 and completed in 1892.
William Clark Falkner was quite a character. He killed at least two men in his lifetime and was murdered himself. He left his family in Missouri around 1840, and as a fifteen year old boy, made his way to the home of his aunt and her husband, Justiania Dickson Word and John Wesley Thompson, in Ripley.
After a brief stint of service in the Mexican War, W. C. Falkner settled down. He began the practice of law, married Holland Pearce and together they had a son, named John Wesley Thompson Falkner after his uncle. Unfortunately, Holland Falkner died of tuberculosis shortly after their son's birth.
1850 Census
Tippah County, Mississippi
W. C. Falkner 25, lawyer, born in Tennessee, real estate valued at $4,000
John W. Falkner, 2, born in Mississippi
The above census indicates a widowed Falkner with a young son, and it appeared that they were living in a boarding house operated by a Mrs. Whillow. Shortly thereafter, Falkner turned to his childless aunt and uncle who took the young J.W.T. Falkner into their care under the condition that Falkner would not take his son back, even if he remarried. 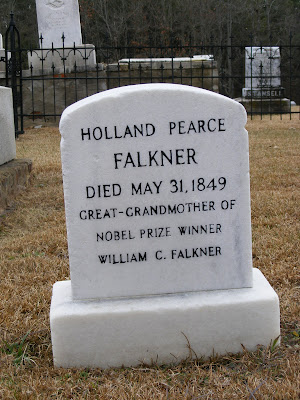 Posted by Mona Robinson Mills at 5:54 AM